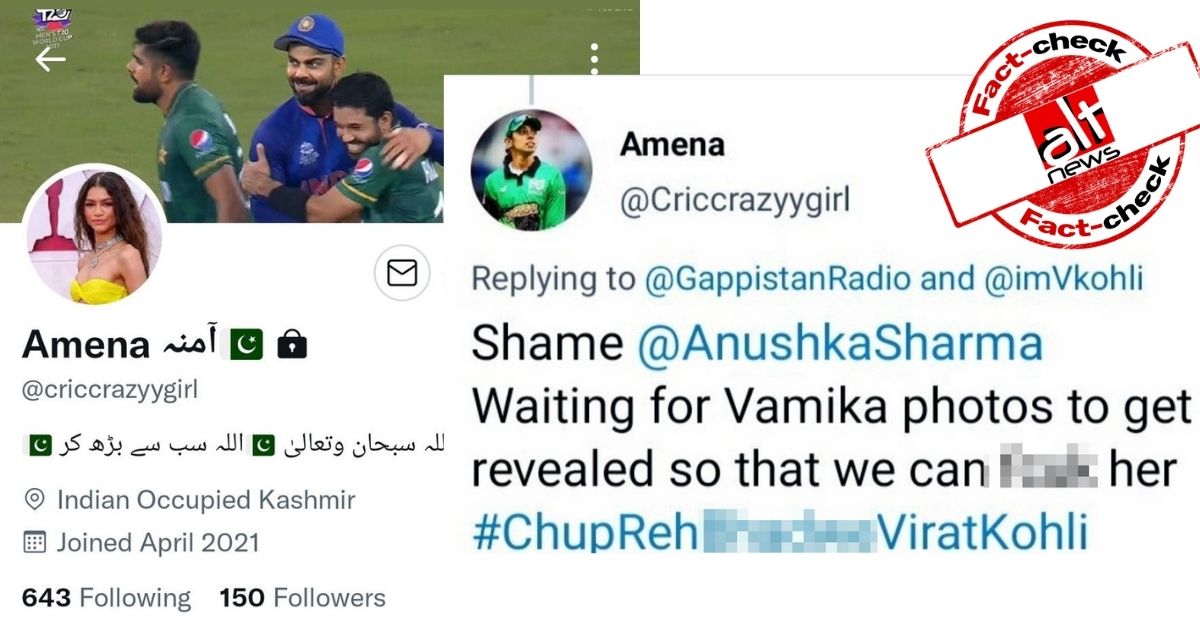 Since Indian bowler, Mohammed Shami, was abused on social media after India’s loss to Pakistan in the T20 World Cup, there has been an organised effort to blame anonymous Pakistani accounts for targeting Shami. Indian cricket team caption Virat Kohli came out in support of Shami and condemned those who attacked him over his faith. A now-deleted Twitter handle ‘Amena @criccrazyygirl’ posted a tweet where the user threatened to rape Kohli’s daughter. It has now been claimed that @criccrazyygirl is a Pakistani bot account.

Several people made the claim while criticising those who called out the objectionable tweet.

A single tweet. From a Pakistani bot account. @borges you’re a journalist. Think hard about the voices you choose to amplify. And no, this has nothing to do with India. There’s self awareness and self-critique and then there’s propagandists with agendas to peddle. https://t.co/TG73w5GMUG pic.twitter.com/QRY69uSwUE

Here’s the tweet that @payalmehta100 deleted. This was based on tweet by a pakistani bot. https://t.co/Q9MakFjl5z pic.twitter.com/pFXfCrlCp2

Alt News first searched for archived links of tweets by @criccrazyygirl to find the unique Twitter ID of the account. When we found a tweet on Wayback Machine, we viewed the source code of the page and found that its unique Twitter id is ‘1386685474182369290’. Twitter’s policy allows a user to change their username, however, the numeric ID or the unique ID remains constant despite a change in the username as it is unique to that account.

We then looked for replies to @criccrazyygirl on Twitter and discovered some tweets that redirected to @ramanheist. This means both accounts were the same but the username was changed.

We applied the same process of finding archived tweets of @ramanheist on Wayback Machine and looked for the unique Twitter ID on the source code page. The unique ID is the same, as evident from the screenshot below.

We also found archived links of tweets where @ramanheist is talking about trading on NIFTY which is an Indian stock market index. He also shared an email by Zerodha, which is an Indian financial services company. This suggests that the person behind the account hails from India.

It is noteworthy that from its most recent username @criccrazyygirl, the account had retweeted tweets in Telugu which also hints it is an Indian account.

The earliest username that the person used to operate under, which Alt News was able to locate, was @pellikuturuhere, which is a Telugu word. We found a reply to @pellikututuhere that suggested the person is from Hyderabad.

A further rummage of replies to @criccrazyygirl took us to a tweet where a user had replied to the account but @cricccrazyygirl’s tweet is not visible since the account doesn’t exist anymore. We searched for an archived link of the reply on Wayback Machine and found that by the time Wayback Machine had crawled the tweet, the username of @criccrazyygirl had been changed to @StellaisBihp.

Wayback Machine also reveals that the person has retweeted tweets by OpIndia, its CEO Rahul Roushan and pro-BJP accounts. They also retweeted anti-Muslim tweets, tweets on Hindus and pro-BJP tweets. The person’s Twitter activity does not suggest that they are from Pakistan. The claim that a Pakistani bot account posted an objectionable tweet targeting Virat Kohli and Anushka Sharma’s daughter is false. The account is from India.

Donate to Alt News!
Independent journalism that speaks truth to power and is free of corporate and political control is possible only when people contribute towards the same. Please consider donating in support of this endeavour to fight misinformation and disinformation.

To make an instant donation, click on the “Donate Now” button above. For information regarding donation via Bank Transfer/Cheque/DD, click here.

A video of police personnel lathi-charging a group of people is viral on social media….