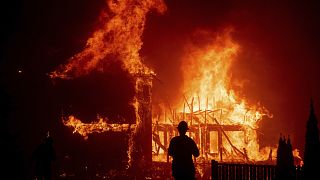 A home burns as a wildfire called the Camp Fire rages through Paradise, Calif.

“Facebook is taking money in many occasions for content that is out and about climate denial.” Sean Buchan, a researcher for Stop Funding Heat told The Cube, Euronews’ social media newsdesk.

“This is how their entire business model works, they take money from advertisers to put in between what we call organic posts on the platform.”

The group’s 40-page study claims that there is no mention of climate misinformation in any of Facebook’s public policies and that existing policies are ineffective.

“When they [third party fact-checkers] rate this content as false, we add a warning label and reduce its distribution so fewer people see it. We also take action against Pages, Groups, and accounts that continue to share false claims about climate science,” a Facebook spokesperson said.

But Stop Funding Heat said that the Climate Science Information Center does not go far enough.

“It does not really follow the climate communication science as it should. It says you need to inoculate people to myths that you see but the Information Center doesn’t really connect people to the myth they saw and then inoculate against that,” Buchan said.

“Our recommendations for Facebook are number one, stop taking money for climate denial on its platform as soon as possible. Number two, update its community and advertising guidelines standards to include climate change misinformation.”

“We would also like Facebook to be more open with the extent of climate change misinformation on their platform…and how much is being stopped.”

2021 is set to be the most challenging year yet for climate change misinformation according to Stop Funding Heat.