The silence period, or the period of tranquility before the polls, is a feature of elections that aims to preserve the space for reflection before polling day. According to Section 126 of the Representation of the People Act, 1951-reg, during these 48 hours, political parties are prohibited from conducting election campaign activities through public meetings, processions, and displaying election matter through television, social media, print media, or radio. 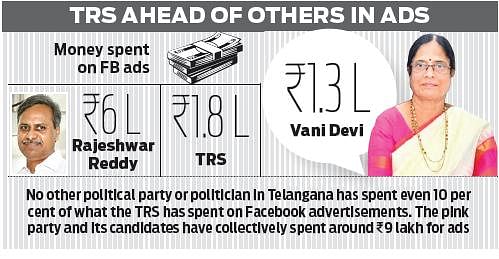 The TRS party has around 300 different ads tailored for targeting graduates. Of the 5.31 lakh registered voters, 3.36 lakh are male, 1.95 lakh are female, and 68 are the third gender. Since one-third of overall voters this year are male graduates, around 90-95 per cent of the advertisements were shown to male users, while the remaining few to female users. The age group most targeted was 18-24 (65 per cent) followed by 25-34 (30 per cent).