People are getting used to the idea of shopping on social media.

Much of that growth seems to be driven by Facebook (NASDAQ:FB), which continues to invest in its Marketplace platform and shopping on Instagram, and is also working on a nascent mobile payments platform in WhatsApp. Instagram, in particular, with the introduction of Checkout, new features in the Explore tab, and the ever-expanding presence of “influencers,” has had a big influence on shopping habits.

While other social media platforms like Snap‘s (NYSE:SNAP) Snapchat and Pinterest (NYSE:PINS) have tried to edge their way into consumers’ shopping patterns, Facebook has been the biggest beneficiary so far. 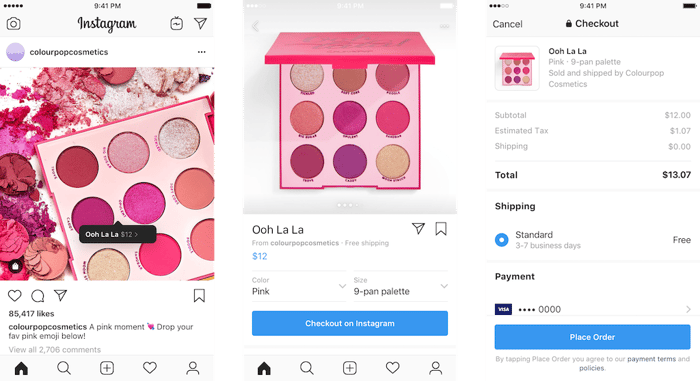 The biggest effect so far

Two Facebook products have had the biggest effect on social shopping so far.

Facebook Marketplace, which is Facebook’s answer to Craigslist, launched a little over three years ago, and it’s now available in over 100 regions. Founder Mark Zuckerberg says Facebook sees millions of interactions between buyers and sellers every day on the platform.

Facebook is continually taking steps to improve Marketplace, from tools that help local sellers list items and buyers find them to expanding the platform to include inventory from e-commerce companies. The moves have made shopping on Facebook Marketplace a much different experience from Craigslist or other online classified advertisement sites.

Facebook’s big push into shopping on Instagram may be even more noticeable. Instagram is one of the social media platforms users go to specifically to discover new products. Influencer advertising has become an entire sub-industry of digital advertising. And influencers on Instagram have more … influence … than most other social media platforms. 42% of daily Instagram users have made an influencer-based purchase, according to another CivicScience survey. That’s up from 34% in 2018.

There was a noticeable increase in respondents saying they’ve shopped directly on social media after Facebook introduced Checkout on Instagram. Checkout enables Instagram users to seamlessly buy items they see on Instagram without navigating to a merchant’s website. The product is still limited to select retailers, which means there’s a lot of potential for growth as the number of participating merchants expands.

Facebook’s biggest competitor in social shopping may be Pinterest. Many Pinterest users use the platform exclusively for discovering things to buy.

There’s strong potential for Pinterest to copy Instagram Checkout. It already offers retailers Shopping Ads (as does Facebook), which provides users with details about items and then sends them to a checkout page on the retailer’s website. Developing a more seamless checkout process like Instagram Checkout could help Pinterest increase the value of those ads through higher conversions and increased engagement.

Meanwhile, Snap has been trying to edge its way into social shopping by using its advanced camera and image recognition capabilities. It partnered with Amazon in 2018 to offer visual search capabilities within its app, sending users to Amazon’s marketplace whenever they Snap an item they’re interested in buying out in the wild. Pinterest offers a similar feature, as does Amazon’s app.

Importantly, Snapchat’s user base doesn’t use the app to discover items they want to buy like they do on Instagram or Pinterest. As such, the company has wisely shifted to investing in areas where its users have already made a habit of opening Snapchat — consuming content and connecting with friends.

Facebook, with its massive and highly engaged user base and head start in social commerce, sits in the catbird seat when it comes to capitalizing on the growing trend of shopping directly on social media apps.

As always, management is thinking long-term. “We are optimistic on the timeframe of years, right, not driving next quarter’s business,” Zuckerberg said on Facebook’s third quarter earnings call. And with just 23% of social media users actually shopping directly in apps like Facebook and Instagram, there’s good reason to take the approach of expanding the reach of its products instead of trying to monetize them quickly.